Everyone has a favorite color. 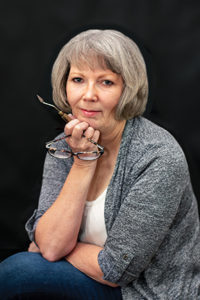 Or two! I love ALL colors, as they speak to me in ways I cannot fully explain. My artwork appeals to young, old and in-between, often becoming visual and conversational focal points that bring joy and intrigue to the viewer. You may prefer a large painting in your favorite color palette to complement your décor, or a smaller work to grace a side table, bookshelf or desk. I work in several sizes, and specialize in miniature art that makes a perfectly unique gift for a coworker or friend.

I sign, title and date the back of each piece allowing you to decide its orientation when displayed. Discover how the painting speaks to you and choose the orientation you prefer – rotating it for a completely new experience – as you seek new inspiration over time. Created intuitively, extremely spontaneous and organic, my artwork often evokes subconscious emotional connections to color. Hidden images emerge as your imagination runs across the canvas. I create your paintings based upon my knowledge of color theory and color harmony, incorporating your favorite color (or colors) as the subject.

What may I paint for you? 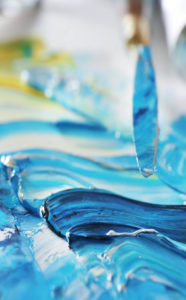 Painting intuitively releases and frees my soul, often quieting my racing mind. I find it an extremely calming experience for me, both mentally and physically. I can spend hours painting – merely minutes to me – never realizing time passed until I look at a clock and wonder where the time went. My mind focuses on the acrylics, while the palette knife directs me where they need to go. Loose, yet calming (and sometimes pleasingly chaotic), my abstracts emerge totally free from constraint.

I paint using the alla prima technique (‘wet-on-wet’ or translated directly in Italian, ‘at once’) while incorporating my own “impasto-like” finesse. This combination creates very distinct and very stylized abstracts; rich and thickly layered with a fluid use of vibrant color. I allow the harmony of the hues to become the subject of my abstracts.

Painting horizontally, I generally use 3-5 hues and subtle blends, to create a free flowing sense of movement. I may use multiple palette knives, but rarely use traditional brushes. Sometimes, my palette knife marks remain distinguishable, other times, invisible. I use a gloss varnish upon completion to convey an intriguing state of wetness.

How Did I Get Here?

At a young age, my parents recognized my artistic abilities after I scribbled with a black crayon and called it “Dean” (my father). For a toddler’s drawing, it had a familiar resemblance to my dad, thus beginning my lifelong love of art. In elementary school, my parents enrolled me in private lessons continuing until high school. I enrolled in college as a Fine Arts major; however, during my sophomore year, a mental health crisis sidelined my college career for nearly two decades.

While creating a color palette for a commissioned, realistic oil painting, my father-in-law at the time, became intrigued by my palette knife work. Marveling at the prep work on my canvas pad, he stated, “Do not throw those away – someone would buy that! I find it fascinating and very difficult to believe that is not the painting.” Those comments resonated in my head although several years passed before I incorporated this very distinct and very stylized technique into my abstract artwork. I credit my ex father-in-law for initially instilling the seed to create my distinct alla prima abstracts.

In 1988, my daughter was born and doctors discovered she was severely/profoundly deaf. Through painting we found ways to bond. We would sit together on the floor learning sign language, signing the colors of paint I used. It was also during this time that I switched from oils to acrylics, finding them easier to manage with a very rambunctious, deaf toddler in the house.

Having a life-long desire to work in advertising, I returned to college in the late ‘90s, obtaining a BFA in Visual Communication, with honors, from The Kendall College of Art and Design, Grand Rapids, Michigan. In 2000, I gave birth to my son and returned to school in 2001, polishing my portfolio at The Creative Circus in Atlanta, Georgia. I graduated with a certificate in Art Direction in 2003. As an award winning art director, I found working in the advertising field immensely rewarding.

While obtaining my BFA and certificate, I studied color theory, color harmony and the psychology of color intensely. One of my favorite abstract artists, Wassily Kandinsky, a Russian painter and art theorist, influenced my beliefs even more. I too, believe in color as spiritual, that color expresses intimately the inner most feelings of the soul. Often without a conscious thought. Intense studies in the intricacies of color ameliorated my artwork.

In 2008, my son was diagnosed as autistic and with a very rare but benign brain tumor. I found myself struggling, preventing me from working. I stopped painting for nearly three years. After a near-death experience in the summer of 2012 I slowly began to paint once again. Today, I have reached a point of peace with my art. Through life’s struggles, I have gained perspective  – an understanding of my art – as a way to both express and heal myself.

After living nearly 20 years in the Atlanta, Georgia, area, I am currently a middle Tennesee artist residing in a tiny, antique market and artist type community called Bell Buckle, approximately an hour southwest of Nashville, Tennessee.